Success story: How joining a co-working space led to a beautiful business collaboration 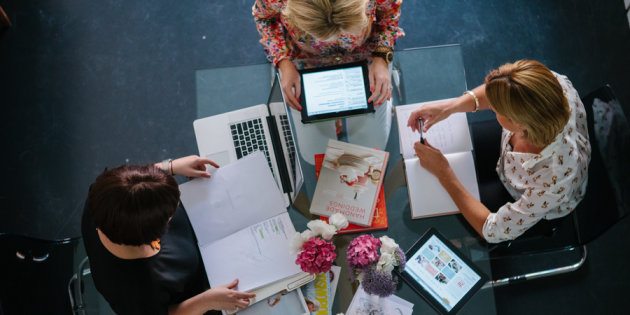 Collaborative workspaces don’t just save money for startups and solve the problem of an isolating home office, they can lead to incredible new ventures.

Sydney wedding stylist Jess McLeod was running her own company, Oscar & Ruby, from home in 2010 when the opportunity arose to join a collaborative space.

Marissa Mills, wedding photographer she had met through a networking group invited her and another photographer, Nadean Richards, to share a two-level creative space in Alexandria so they could work away from home but not pay through the nose for an expensive corporate suite.

Within a few months of sharing an open plan space and one long desk divided into three, the trio recognised they could collaborate on something bigger than their individual business.

“We realised that there was some potential for us to work together on something – we just didn’t predict at the time that ‘something’ would turn into an international company,” McLeod told The Huffington Post Australia.

“We started talking about how we knew so many people in the industry that maybe we could bring them all together and hold a wedding fair. We didn’t really think it through.

“We just said let’s do a wedding fair and three months later we did it. We set a date and booked a space, committed to it, told people we were doing it and then we just had to make it happen. And it went from there.”

The trio formed One Fine Collective which runs One Fine Day Wedding Fairs and, since 2014, One Fine Baby events. They have hosted 20 successful fairs in Sydney, Melbourne, Canberra, Perth and Adelaide and are now a team of six and have moved into bigger office space.

McLeod said the business would probably never have happened if they were working independently.

“Sharing a space allows room for inspiration and thinking outside of our own ideas,” she said.

“Obviously there are financial benefits of sharing rent and internet costs. But also the social benefit – the sharing of ideas, the potential to troubleshoot and discuss things business and otherwise.

“There were things that each of us brought to the table, and it just meant we were a force to be reckoned with. Together we could achieve more than what we could on our own.”

Shared workspaces, such as those at Business Hub at Queenscliff Marina are now a booming industry in themselves, offering hot desks, private offices, meeting rooms, weekly events and business mentoring. Contact the team to see how we can cater to your business’s needs.

This article by Cathy Anderson originally appeared in The Huffington Post Australia.